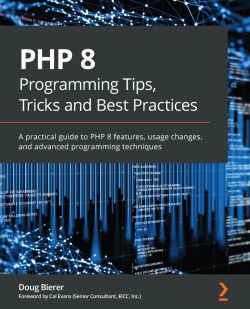 unlikelysource.com is involved in many projects, highlighted below. Services include: consulting, design, development, testing, tech writing and training.

We're very pleased to announce the creation of a new YouTube channel. Check it out here:

This website is powered by a micro framework Doug created called FileCMS.

Recent podcast with Matthew Setter where we talk about the current state of computer code. I also dive a bit about my past 50+ years experience in the computer industry.

Interview February 2022 with Cal Evans where we discuss the future of PHP and my book on PHP 8.

Interview earlier in 2022 with Ajay Balamurugadas where we wax philosophical and talk about all kinds of things.

unlikelysource.com  is a consortium of developers covering all aspects of web development from front to back. The three principal members are: Doug Bierer, Noona and Scott.

Code examples really show you what we're all about. We have 88 public repositories on github.com with examples written over the years primarily focused on Mezzio, Laminas (formerly Zend Framework), PHP, MySQL and MongoDB.

Under the stage name of Zelfë  Doug played in the band Control which gave a number of unique performances in the early 1980s. He released a CD Contrasts in 1999. Look for a new release featuring Big Band music in the next year.

Andrew Caya has handed over the reins of the of the ever popular Joomla Simple Email Form extension back to yours truly. Andrew was instrumental in bringing this extension into the modern age, and his guiding hand will be missed. Check out the demo.
Coming Soon: Joomla 4 support!

Fiction titles, written under the pseudonym Douglas Alan , from Lulu include:

Other titles from Packt are listed below:

Simple Things You Can Do

Apply political pressure. The current "leadership" lacks the political will to not only alleviate the effects of climate change, but to do anything other than to serve their corporate (and 1%) overlords.

Don't give up hope ... check out our training and cloud services. We can help you launch a new career or get your business online quickly and affordably. Without the stress of worrying about how you're going to get money to pay the rent or feed your family, you'll be in a better position to VOTE 'EM OUT and also to save our planet. It's the only one we've got.

What we should all be talking about right now is climate change and Global Warming. I find it personally incredible that such an obvious issue is not being discussed in the mainstream media. Finally ... a good report on this in The Economist of all places!

The evidence staring us in the face: we read about it in the news every day, but it seems that very few people are willing to connect the dots and ask the simple question: what do the out-of-control wildfires in Australia, California, Greece and Sweden(!), have in common with extended hurricane seasons, and melting ice caps? Most climate scientists give us, i.e. the human race, eleven more years before this planet goes past the tipping point and starts sliding down to become uninhabitable for human life. The 1% ruling elites know this pretty well. They're preparing their bunkers and private armies. Also ... why do you think several billionaires are all of sudden interested in getting into outer space and Mars? Question. Think. Act!!!